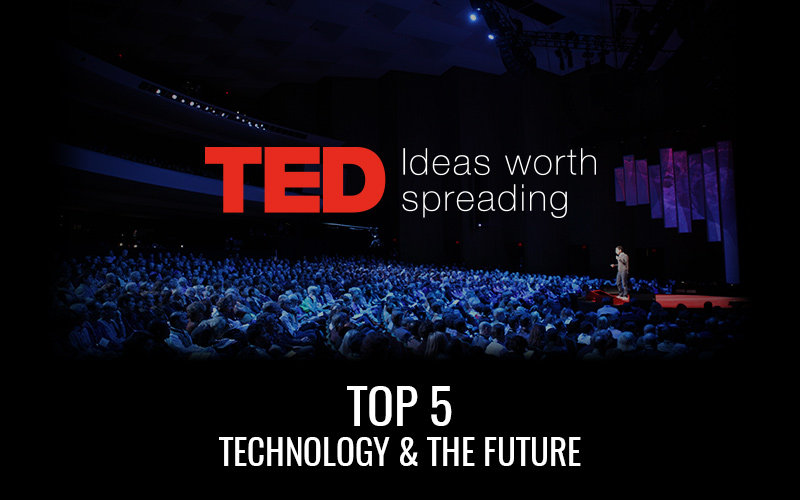 These are the Top 5 TED talks about Technology and the Future. TED is a great resource for informative videos. It is a nonprofit devoted to spreading ideas, usually in the form of short, powerful talks by people who have something interesting to share.

There are a lot of exciting things happening now in technology. Artificial intelligence (AI), space exploration, genetics and renewable energy are capturing headlines all over the world. Every year hundreds of thousands of people join these industries, hundreds of startups get funding, dozens of breakthroughs are made. Each of these industries has a potential to completely change the way our society functions and will determine the future of human species.

In my opinion, AI is the single most important and impactful technology that is being developed on our planet right now, as it can be the key to perfecting all other technologies, however, each of these industries deserves a dedicated blog post. Later, I will go into detail about why all of them are so exciting and important to our future but for now, I hope you enjoy this top 5 list that I compiled for you.

Entrepreneur Elon Musk is a man with many plans. The founder of PayPal, Tesla Motors and SpaceX sits down with TED curator Chris Anderson to share details about his visionary projects, which include a mass-marketed electric car, a solar energy leasing company and a fully reusable rocket.

Artificial intelligence is getting smarter by leaps and bounds — within this century, research suggests, a computer AI could be as "smart" as a human being. And then, says Nick Bostrom, it will overtake us: "Machine intelligence is the last invention that humanity will ever need to make." A philosopher and technologist, Bostrom asks us to think hard about the world we're building right now, driven by thinking machines. Will our smart machines help to preserve humanity and our values — or will they have values of their own?

Jeremy Howard - Computers that can learn

What happens when we teach a computer how to learn? Technologist Jeremy Howard shares some surprising new developments in the fast-moving field of deep learning, a technique that can give computers the ability to learn Chinese, or to recognize objects in photos, or to help think through a medical diagnosis. (One deep learning tool, after watching hours of YouTube, taught itself the concept of "cats.") Get caught up on a field that will change the way the computers around you behave ... sooner than you probably think.

When a very young child looks at a picture, she can identify simple elements: "cat," "book," "chair." Now, computers are getting smart enough to do that too. What's next? In a thrilling talk, computer vision expert Fei-Fei Li describes the state of the art — including the database of 15 million photos her team built to "teach" a computer to understand pictures — and the key insights yet to come.

Geneticist Jennifer Doudna co-invented a groundbreaking new technology for editing genes, called CRISPR-Cas9. The tool allows scientists to make precise edits to DNA strands, which could lead to treatments for genetic diseases ... but could also be used to create so-called "designer babies." Doudna reviews how CRISPR-Cas9 works — and asks the scientific community to pause and discuss the ethics of this new tool.

In a robot lab at TEDGlobal, Raffaello D'Andrea demos his flying quadcopters: robots that think like athletes, solving physical problems with algorithms that help them learn. In a series of nifty demos, D'Andrea show drones that play catch, balance and make decisions together — and watch out for an I-want-this-now demo of Kinect-controlled quads.